It's a Jelly-Eat-Jelly World - Merry Passage

Propelled by 8 ciliated comb rows, sea gooseberries troll the water dragging 2 retractable tentacles. When fully extended, fine side-branches on the tentacles have specialized cells which adhere to fish larvae, copepods, eggs, and small crustaceans. My lens captures some of the larger copepods, which are barely visible to the naked eye.

At only 5/8”, Pleurobrachia bachei doesn’t usually promise thrills and chills. But this day was different.  Gooseberries were pretty much the only thing to photograph, and I was losing interest.  Generally, Pleurobrachia pulses along in an upright position with its tentacles extended - at least until a strobe flashes.

Eventually, a spinning marble caught my eye as a gooseberry maneuvered a tentacle to the top of its mouth.  It was consuming the prey caught in its sticky tentacle.

The interior of the little gooseberry is pretty straightforward.  The statocyst (balancing organ) is next to the aboral anus (one of multiple).  Even ctenophores need to know which way is up.

Prey in the pharynx.

Since Beroe species are famous for biting into or engulfing prey as large as they are, I assumed that tears in the body of the Pleurobranchia had been made by this Beroe.  But it appears that the Beroe was after prey that was caught in the tentacles. 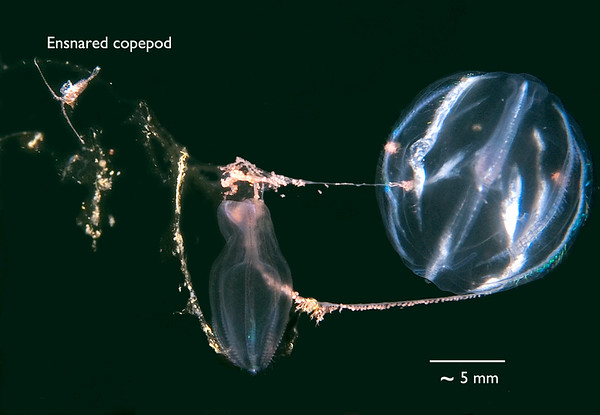