It was the year when salps inundated the water column, and if caught in current lines, individual salps crowded the surface.  Dense swarms of salps at depth appeared either as wheeled bouquets, elegant coils, or slithering chains.  This was so much the year of the salps that a 2012 survey by the NOAA Southwest Fisheries Science Center in Santa Cruz reported that a single trawl contained as many as 500,000 salps. Contrast this with 235 salps per trawl in 1999.

There are about 50 described species of salp.  What can be confusing in their identification is that the solitary animal can be physically different from a member of the aggregate. Not only are the solitary and aggregate forms morphologically different, but each form reproduces differently as well.  The solitary form is the asexual phase of the reproductive cycle. It simply clones itself, producing hundreds of babies that are joined together in chains or coils.  The aggregate form, the sexual phase, uses the old-fashioned egg and sperm approach, and produces a single embryo per salp.  The two forms alternate each generation, allowing salps to proliferate rapidly and do so in huge numbers when food is abundant.

Alternation of generations was discovered in salps in 1818 by the German zoologist Adelbert von Chamisso.  Chamisso was traveling on a voyage around the world on board the Russian brig Rurik as part of the expedition to find the Northeast Passage. In recognizing and describing this phenomenon, Chamisso demonstrated remarkable insight. Considering how little was known about marine life in the early 1800’s, it is not surprising that his contemporaries didn’t buy the idea. Consequently, it took more than 20 years to finally confirm and accept the method of reproduction in salps. 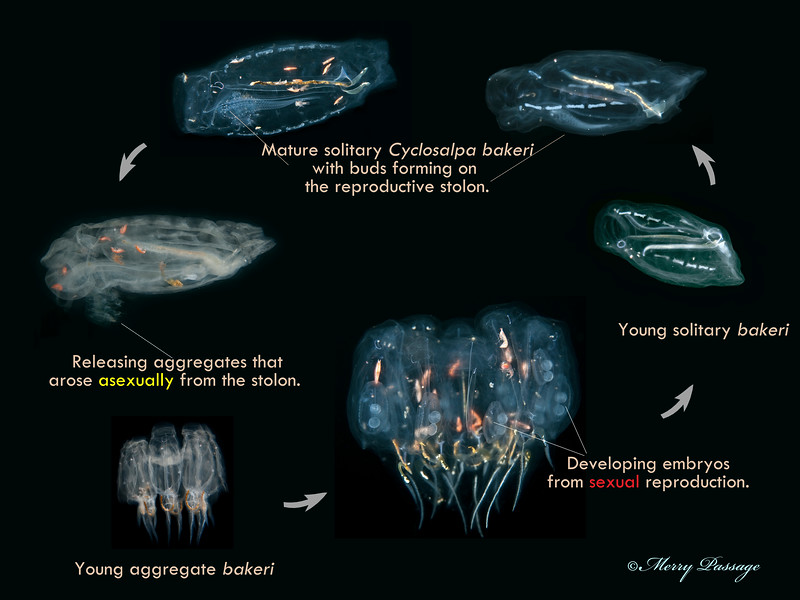 Contrast the lean aggregate shape of Pegea confoederata with its blimp-like solitary form. Individuals in the aggregate produce one embryo each that is attached to the dorsal wall and will develop into a single, globe-shaped animal.

After detaching from the stolon, the small buds of Pegea confoederata rapidly grow into a chain of 5-inch long individuals.